This year I am attempting to do a December Daily Album.

I started with a DCWV Album Made Easy and inked both outside covers with Tim Holtz Distress Ink  walnut stain to get the dark brown color you see in the picture above. 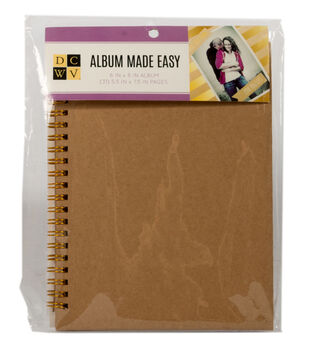 The gold letters and year on the cover are from a Sticko alphabet sheet .

To keep it simple  and cohesive I decided to use one paper pad for the whole album. I chose DCWV Merry Memories 12 x12  cardstock paper pad that I purchased at JoAnn’s. I love the colors of the paper and the glitter that’s on some of the pages.

For embellishments I chose Pink Paislee Snow Village ephemera pack, Heidi Swapp Oh What Fun chipboard die cuts and a roll of gold glitter washi tape.  The colors of the chipboard pieces and the ephemera pack went really well with the paper pad.

For the cover, as previously mentioned, I used Tim Holtz Distress Ink  walnut stain to get the dark brown color.

The stars are from the two embellishment packs accept for the large red star on the right side which is die cut from a sheet of the paper pad is used for the album.

The trees also came from the embellishment packs I previously mentions.  I added two pieces of wood veneer I cut down to serve as the trunks of the red tree and the smaller green tree next to the red one.

The green behind the trees at the bottom is gold washi tape inked over with olive green Stazon. ink.

To get the curve in the word December I laid a large oval die on the book and used the edge to line up my letters.

I had so much fun making the cover for the album that I went on to pre-make the base pages of the album and discovered that with the additional paper and embellishments the gold binding comb on the album wasn’t wide enough.  I tried removing some pages, keeping it to at least 25 to make it to Christmas, but there still wasn’t going to be enough room so I removed the original binding and used three binding rings instead.

The binding rings worked great and now I have room to add my pictures more embellishments.

Below are the pages I pre-made for my December Daily 2015 Album.

I love fall; the crisp cool weather and the gorgeous color of the leaves.   Emma took this great picture  of my aunt and uncle sitting on a stone wall with beautiful fall trees in the back ground when they were all spending the day together apple picking.

I matted the photos on dark brown card stock.

The paper strips came from my scraps.

I used a Paper Studio punch for the gold and orange leaves.

The squirrel, heart and arrows are wood embellishments I colored with ink and a marker for the squirrel.

I used Heidi Swapp Color Shine in Gold Lame for the splatter.

The tag is a studiog chip board sticker and the alphabet stickers are by Sticko.

The Magic House was one of our favorite places to go as a family when the girls were younger.   It’s filled with a variety of hands on playing and learning areas like the grocery store, a bank, a pizza parlor, a library and so much more.  On this visit there was a new veterinary area where the kids could pretend to care for stuffed animals. My girls loved it and were there quite awhile giving check ups to the various animals.

This is my first pocket page layout.

The pocket page is We R Memory keepers, but the cards are Project Life Maggie Holmes addition Core Kit.

For the title I used Sticko alphabet stickers.

I added a few paper strips as banners to a couple of the cards.

A few years ago my husband went on a fishing trip to Canada with some of the guys from work. I’m not sure why they had to go all the way to Canada, but apparently it’s a good place to fish and they had a great time.

I double matted the photo with some scrap paper.

The four fish related cards are  part of a cut apart sheet from a DCWV paper pad called Out In The Wild.

The other gridded card is a Project Life card.

The little splash of water on the PL card is from a sticker sheet that came in a variety pack of stickers I got at Joanns a few years ago.

The bobbin and fishing lure are stickers I had left over from a sticker sheet I bought at Hobby Lobby.

These photos are my girls on a bouncy house slide at the balloon races a couple of years ago.  I love the one on the bottom right where McKayla is in mid-slide. I double matted the photos with papers from the same Dear Lizzy Lucky Charm paper pad.

The arrows are wood veneer and I inked them and the border of the background paper  with teal blue Stazon ink.

I placed some dots to the left side and the bottom right corner.

I added some lines for journaling and at first I wrote in a red ink, but went back over the journaling with black ink.

This year both of my girls were in middle school along with their cousin Katie and with middle school comes locker day.  It was the first year for McKayla and Katie, but Emma loves to organize her school things so it was a fun for all.

I matted the photos on card stock and I inked a border on the background paper.

I die cut the letters for the title from the same paper I matted the photos on.

I used my Cuttlebug  to die cut the letters and the tree stars on the upper left side.

I used Tim Holtz idea-ology label letter stickers for the year under the title.

This was Emma’s first season of soccer.  I matted the pictures with black card stock, but didn’t add any additional embellishment because I felt the background paper was a great accent to the photos all by its self.